Police arrested the pair in the early hours of Tuesday (Nov 24) morning.

Hong Kong police arrested an elderly taxi driver and a motorist in a Lamborghini after the two had a fight in the middle of a road in the early hours of Tuesday.

The pair came to blows at the junction of Chatham Road South and Gascoigne Road in Yau Ma Tei shortly before 1am, after the sports car had driven into the back of the cab.

According to police, the taxi was slowing down as it approached the junction and the sports car failed to brake in time and rammed into it.

Neither the 29-year-old driver of the Lamborghini, nor the 81-year-old cabby, were seriously hurt in the incident.

“The two drivers were suspected of fighting each other in a dispute over the issue of compensation [for the collision],” police said in a statement.

Officers were called and arrested the two men on suspicion of fighting in a public place.

The two motorists suffered minor injuries in the altercation, and were taken to the nearby Queen Elizabeth Hospital for treatment.

Separately, a 47-year-old man escaped serious injury when his car smashed through railings, crashed 20 metres down a hill and turned upside down in Sha Tin around 2am. 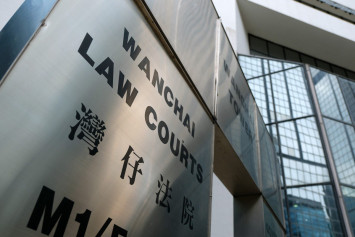 The vehicle was travelling along the Sha Tin Heights section of Tai Po Road, heading toward Kowloon at the time of the incident. A 20-metre stretch of railings and a traffic sign were damaged in the crash.

“An initial investigation showed the driver veered to avoid hitting a dog and lost control of his car,” a police spokeswoman said.

The driver managed to climb out of the vehicle and left the scene before emergency personnel arrived.

The spokeswoman said the man went to Caritas Medical Centre in Cheung Sha Wan to seek medical treatment, adding the driver passed a breathalyser test and no one was arrested.