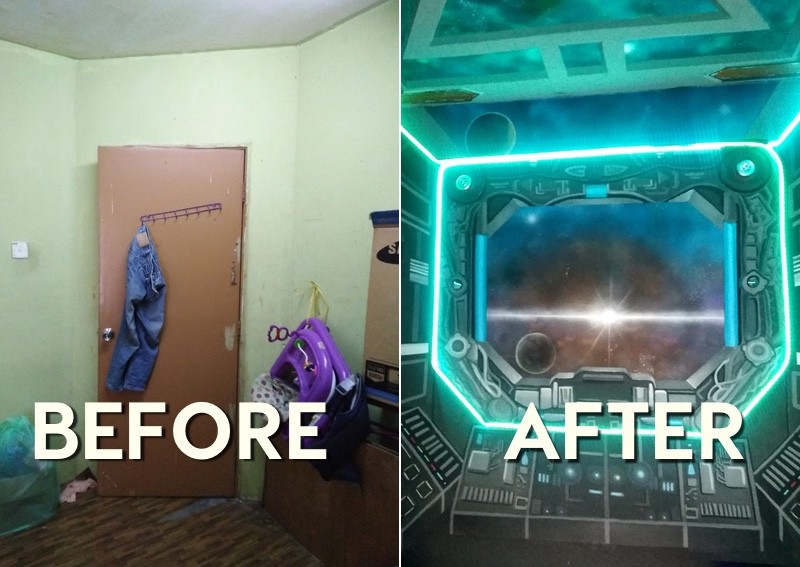 Parents currently working from home (as you should) would know how hard it is getting stuff done with wee toddlers around.

Juggling both work and kids at home obviously demands extra energy and effort — but doing so every day? That’s gonna need a lot of caffeine and sheer will.

Two of my co-workers have very loud sword fights EVERYDAY that start with giggles and end with one or both of them screaming and crying. And they insist that the rest of their co-workers witness the battle.

Unlike other parents who might simply let their children’s eyes go dry from watching Netflix or playing games on the iPad, Ahmad Fathil Zakaria embarked on a project that goes way beyond the call of duty to keep his two-year-old daughter entertained. After all, the Malaysian artist is heeding the on-going movement control order that requires Malaysian citizens to stay put at home in the efforts to reduce Covid-19 cases.

In a Facebook post, Ahmad shared the process of how he converted a room in his Kuala Lumpur abode into a cosmic play space and study room.

Utilising all his skills as an artist, the father transformed the small, odd-shaped room into a gorgeous spaceship cockpit.

The key part of his plan, however, involves conceptualising a design that incorporates depth perception — i.e. making the room look bigger than it actually is. He planned it all out first before marking out the blueprints on the walls with chalk.

When it all came together after drawing out the cockpit (and the spaceship corridor), the experience was enhanced with an ambient sound loop consisting of hissing machinery and the soothing hum of a spaceship engine.

The work wasn’t done yet. The supposed windows of the cockpit had to depict the vastness of space, and Ahmad filled up the walls with stars and planets. LED strips (with colours that can be changed using a remote) were affixed for that celestial glow.

Super happy with his handiwork, he brought in a bed into the room so he could feel like he was sleeping in a spaceship. “If Earth is overwhelmed by the coronavirus infection, I’ll just move to another planet,” he joked.

Ahmad kept the bed and brought in a table instead, and now it’s a private study room with a workstation and a staggering view of the stars.

But more importantly, his daughter seems to be more than happy occupying the space.

Unsurprisingly, the post went viral on Facebook and Ahmad received a tonne of messages from netizens who praised him for his creativity. It also proved to be a great vehicle to get his name out — according to a follow-up post, he mentioned that he has been swamped by commissions for portrait drawing, apologising to those he had to turn down due to overwhelming requests.

Nonetheless, he paid it forward by calling on his fellow artists to take on the jobs.

“My artist friends, please go ahead and spam your portrait work in the comments section,” Ahmad wrote.

“Perhaps this is the time for you to work from home and stabilise your finances until the end of the month.”