A pair of brothers, aged 33 and 29, were arrested after a fight broke out in their flat along Hougang Avenue 5 last night (May 21).

The police told AsiaOne they are looking into a case of voluntarily causing hurt with dangerous weapon.

During the scuffle, their 31-year-old brother not only lost half a tooth but also sustained cuts on his right arm and under his chin, both of which required stitches.

According to the injured man, his younger brother had been drinking at home when he became increasingly agitated.

When his older brothers tried to appease him, the drunk man got even more upset and brandished a knife, waving it around the house.

Their attempts to stop him resulted in injuries in the younger two siblings, as well as a 29-year-old man who was visiting their home.

In an interview with the Chinese evening paper, a neighbour recounted how they had heard a heated argument between the three siblings coming from next door. Shouts and screams were heard at times. 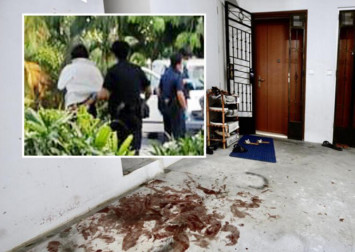 However, when asked about the incident, the men's father allegedly told the neighbour that his sons were just arguing and he could handle the situation.

But the police and ambulance soon arrived at the unit.

The police are currently investigating the incident while looking at possible breaches of safe distancing measures.

Last week, the police noted a 22 per cent increase in reports related to family violence since circuit breaker started on April 7.

They added that they would take tough action against offenders, and also enhance collaboration with social service agencies to combat family violence.