Mr Michael Wiluan in 2017. He is a high-profile name in Singapore's film industry.

SINGAPORE - Film producer Mike Wiluan, the CEO of Infinite Studios, has been placed on a 14-day stay home notice (SHN) and had the validity of his re-entry permit shortened after he failed to fully declare his travel history upon returning to Singapore.

The Immigration and Checkpoints Authority (ICA) said on Wednesday (March 25) that when Mr Wiluan, a Singapore permanent resident, returned from the United States on March 20, he did not declare that he had also recently travelled to Indonesia - which would have subjected him to stay-home notice requirements.

The authority subsequently detected that the 43-year-old had travelled to Batam on Feb 25 and returned to Singapore on March 7 by flying from Jakarta. He departed for Los Angeles a day later and returned after 12 days.

ICA said that Mr Wiluan failed to accurately declare his travel history even though he would have seen the health alert notices, with the affected countries listed, to remind travellers to identify themselves at immigration counters if they had gone to these countries in the last 14 days.

On Monday (March 23), ICA officers went to Mr Wiluan's house and issued him the SHN for a 14-day period from March 20 to April 3.

When contacted by The Straits Times, Mr Wiluan said: "This is news to me as ICA has already spoken with me and I'm serving my notice. I cannot comment any further as I seek clarification."

Singapore had imposed SHN requirements for travellers who had been to an Asean country on March 16. This was expanded to include travellers from anywhere in the world at 11.59pm on March 20.

Mr Wiluan arrived before the broader requirement kicked in.

Read Also
Man who breached stay-home notice for bak kut teh fix will be investigated: Shanmugam 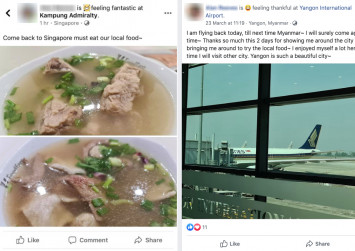 Mr Wiluan is a high-profile name in Singapore's film industry.

He was the local co-producer for the film Crazy Rich Asians and his 2018 film Buffalo Boys was picked as Singapore's submission to the Academy Awards in the Foreign Language Film category.

From 9am on March 27, all travellers arriving in Singapore, including Singapore residents, must submit a health and travel declaration before entering Singapore.

They will be required to provide their health status, recent travel history, personal particulars and contact details.

Those who make a false or misleading declaration can be fined of up to $10,000, imprisoned for up to six months, or both under the Infectious Diseases Act.

For subsequent offences, the penalty is a fine up to $20,000, an imprisonment of up to 12 months, or both. For non-Singaporeans, ICA may revoke or shorten the validity of permits and passes to remain in Singapore.