Spectators wave their flags as they join in the celebrations at the National Day Parade, on Aug 9, 2019.

The Nee Soon GRC MP, who has been working with the committee since last November, disclosed this in a Facebook post on Sunday (May 24) night.

He told The Straits Times on Monday that other suggestions are also being considered, declining to share further details due to ongoing discussions. ST has contacted the Ministry of Defence for comment.

The committee met more than 20 groups over the weekend to continue a "sustained conversation" on how best to make funpacks greener, Mr Ng added.

His post came after a petition was launched last Thursday to allow people to opt out of receiving the NDP funpack, following an announcement by the committee that 1.2 million funpacks will be distributed to all Singaporean and permanent resident households this year.

The petition garnered nearly 80,000 signatures as of Monday, with supporters citing reasons ranging from the poor economic conditions this year due to the coronavirus to making better use of the resources as well as the environment. 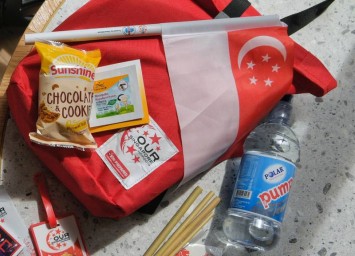 The questions included whether Singaporeans supported the distribution of funpacks, and if they felt these were essential to celebrating National Day.

It is not known when Reach first put up the poll, which closed around lunch time on Monday. ST has contacted the Ministry of Communications and Information for more information.

Mr Ng said this year's proposed funpack is already greener than in previous years, noting that the committee had already scrapped the plastic bag, single-use plastic bottle and the physical discount booklet before the new arrangements to celebrate the occasion in homes were announced.

After the new NDP format was made public, he said the committee also got rid of the usual clapper, scarf and sun visor.

Mr Ng added: "Can we just have no funpacks? We should explore this but I know some people want the funpacks and some don't... I believe we should give everyone a choice."

He noted the constraints of making too drastic changes to the NDP funpack, and stressed that this year's committee has been very "progressive and willing to talk".

Mr Ng has been an advocate of transitioning to a greener funpack, and facilitates the consultation of NDP organisers of green groups.

[ Do you want a NDP Funpack? ] We would like to hear your feedback regarding the distribution of the NDP 2020 Funpack...

Mr Kaushik Ilango, 23, the university undergraduate who started the Change.org petition, said he was surprised to receive such an overwhelming response.

His friends and family members thought the funpacks would be a waste if the items are not useful in their everyday lives, he added.

"Maybe you'll have five minutes of happiness after receiving it. Then it's at the back of your mind and you don't think about it any more," he said.

The resources could be diverted to more important issues like helping low-wage workers and the unemployed, he said. A petitiion to opt-out from receiving NDP 2020 funpack on change.org PHOTO: CHANGE.ORG

Support for Mr Ilango's cause, however, is not unanimous. Mr Clement Chio, 37, is among those who expressed confidence that organisers would have considered the needs and wants of Singaporeans this year in planning for the bags.

"I think it would be something that's appropriate for our current climate,"he said, noting that many items are usually sponsored by big companies, reducing the costs involved.

"If it's going to contain useful items and not stuff I'd throw away, I would really love to have it. I'd make an effort to use them and they will be good memorabilia at the same time," said Mr Chio, who runs a training company.

Mr Kelvin Lai, 42, also welcomed the funpacks as they are a little "piece of history" to own. "As we celebrate the NDP this year, we celebrate this little red-dot Singapore for surviving a worldwide pandemic," the assistant director said.

Green group Zero Waste SG said that while the ultimate goal is to do away with funpacks altogether, it is very supportive of an "opt out" option.

Its manager, Ms Pek Hai Lin, said that another possibility would be to have people choose items they want in the funpacks, which will better inform organisers about what spectators really want.