Guide dogs are the 'eyes' of the visually impaired, helping them navigate the complexities of public spaces.

However, Sophie Soon was turned away when she entered a Subway outlet at Kallang Wave Mall with her guide dog on Thursday (Aug 13).

Not only did the counter staff refused her entry into the store, but he also refused to talk to her and yelled at her for trying to get him to talk to her instead of her friend, she said.

In her Facebook post, the visually impaired swimmer from Team Singapore shared two clips of the encounter and wrote: "He insisted that Subway is a Halal restaurant and guide dogs are not supported by MUIS (they are, by the way)."

Former para-swimmer Theresa Goh also weighed in on the incident, saying in a Facebook post: "While I see this as an opportunity to educate, why is it at the expense of potential trauma to a person with disability?

"Also based on the personal accounts of people there, the staff kept choosing to talk to the only person in the group who didn't appear to have a disability.

"Do you know how hurtful it is to be continuously shut out of conversations and establishments? Surely we can do better."

In response to AsiaOne's queries, Subway said that guide dogs are welcome in its Singapore restaurants and permitted under Islamic Religious Council of Singapore (MUIS) guidelines.

"This customer experience did not meet our high service standards and we are educating our team about how we can better support all customers with disabilities.

"We have extended our sincere apologies to Sophie and she will be joining us for a team training opportunity to raise awareness about guide dogs."

In March 2018, the restaurant chain dropped all pork offerings from its menu and was officially certified to be halal by MUIS five months later. 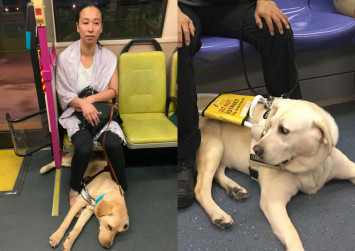 MUIS' advisory on guide dogs said: "Islam commands us to do good to all creatures, including animals.

"Hence, we are very much encouraged to be kind those who need to use guide dogs to get around. Do not react in any way which may offend the owners of the guide dogs or hurt the dog itself."

Members of the public should not try petting a guide dog when they are at work as it could be disrespectful to the handler, Guide Dogs Singapore previously told AsiaOne.

Despite laws allowing them in public spaces such as restaurants and public transport, many people in Singapore appear to be unaware of such rules.

Just last year, blind psychotherapist Cassandra Chiu shared her experience of a passenger stopping her from boarding a bus with her guide dog.

The bus captain intervened and offered her a priority seat in the vehicle.

But incidents like these are not rare for guide dog handlers in Singapore, Chiu said.